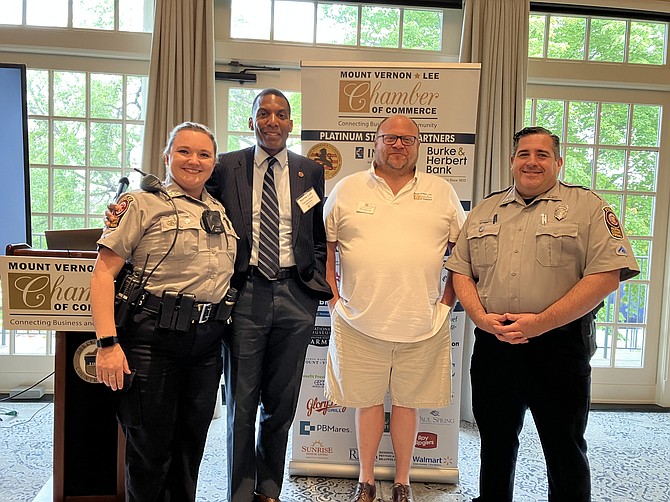 Supervisor Rodney Lusk, chair of the Board of Supervisors Public Safety Committee, started by discussing what Fairfax County is doing to help businesses combat recent increases in crime by including new measures and patrols.

Next up, MPO Sean Corcoran, FCPD Franconia District Station Crime Prevention, and PFC Katie Watts, FCPD Mt. Vernon District Community Outreach, discussed what business owners can do to help prevent and solve crimes as well as deter criminals. In addition to surveillance and alarm systems being put in place, MPO Sean Corcoran also discussed the effectiveness of security film business owners can place over glass doors and windows. Security film is one prevention strategy that works to deny someone from making entry, or at the very least making entry more difficult by preventing glass from falling after shattering. Security film is also cost effective as it can easily be placed over existing glass doors and windows.

In the demonstration video shown, a rock was thrown through a regular glass door, shattering the entire structure and making it easier to walk right through. In the second part of the video, a rock was thrown through a glass door that had security film on it. The film held the glass together after being shattered and the only entry point was a hole the size of a rock, which proved difficult for the demonstrator to pass through. The officers also explained the various thickness levels and options when it comes to security film.

In cases where surveillance cameras and protective film fail to deter or stop an intruder, officers Corcoran and Watts discussed the importance of making sure cameras were set up in the right position to collect the necessary information for investigations. Specifically, business owners should have a camera pointing toward the parking lot which can provide crucial information for officers during an investigation including the type of car used, license plate and what direction the intruder left in.

Residents and business owners can learn more about crime and safety in the community by visiting www.fairfaxcounty.gov/police/chief/crimeandsafety.

Updates on critical incident investigations can be found at www.fairfaxcounty.gov/police/chief/criticalincidentinvestigationupdates

The Mount Vernon District Station covers the Richmond Highway Corridor from City of Alexandria on the north to Fort Belvoir on the south and contains Mount Vernon Estate and Garden, Woodlawn Plantation, Fort Hunt National Park, and Huntley Meadows Park. 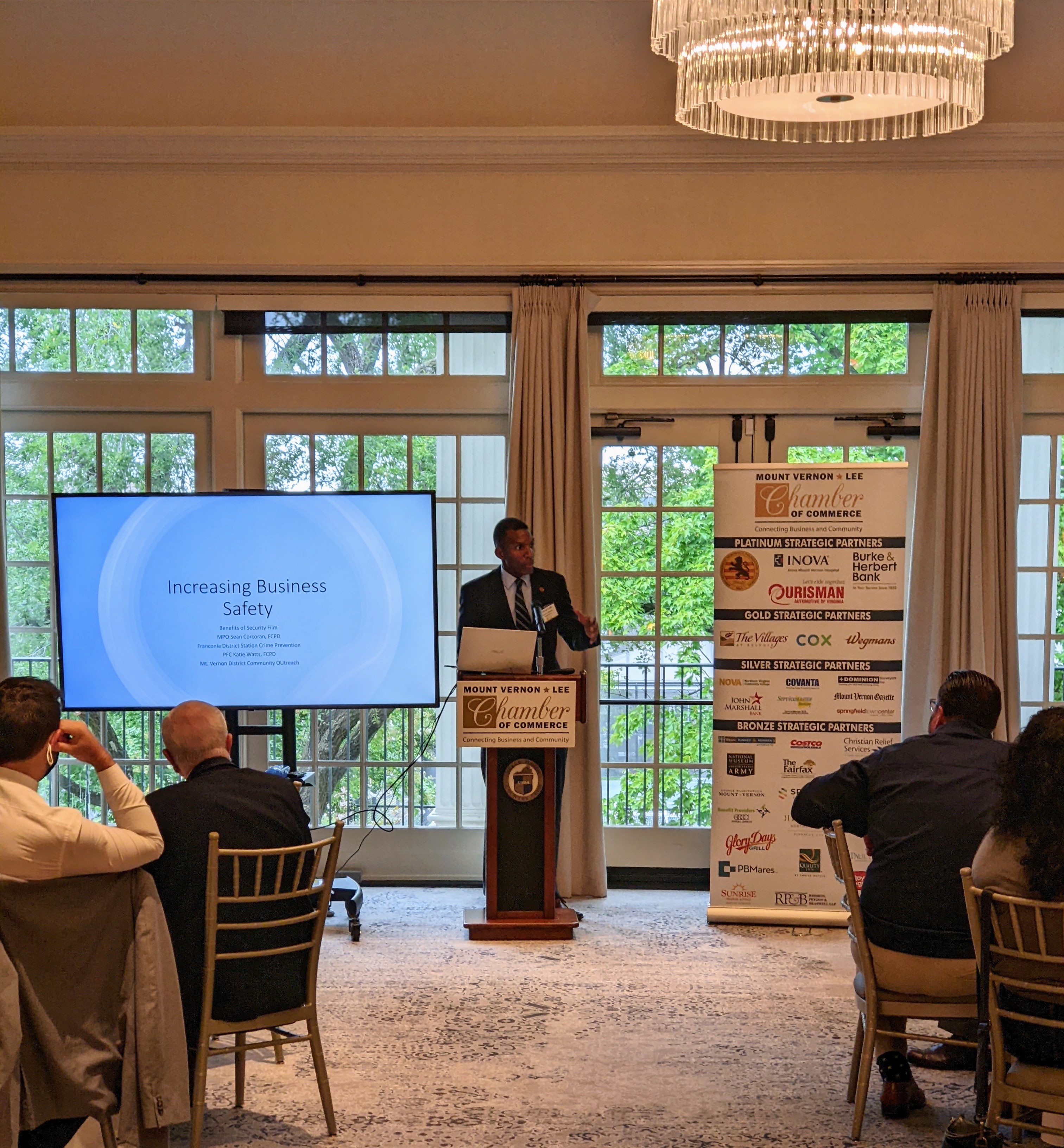 Supervisor Rodney Lusk, chair of the Board of Supervisors Public Safety Committee, discussed what Fairfax County is doing to help businesses combat recent increases in crime. Image courtesy of the Mount Vernon Lee Chamber of Commerce. 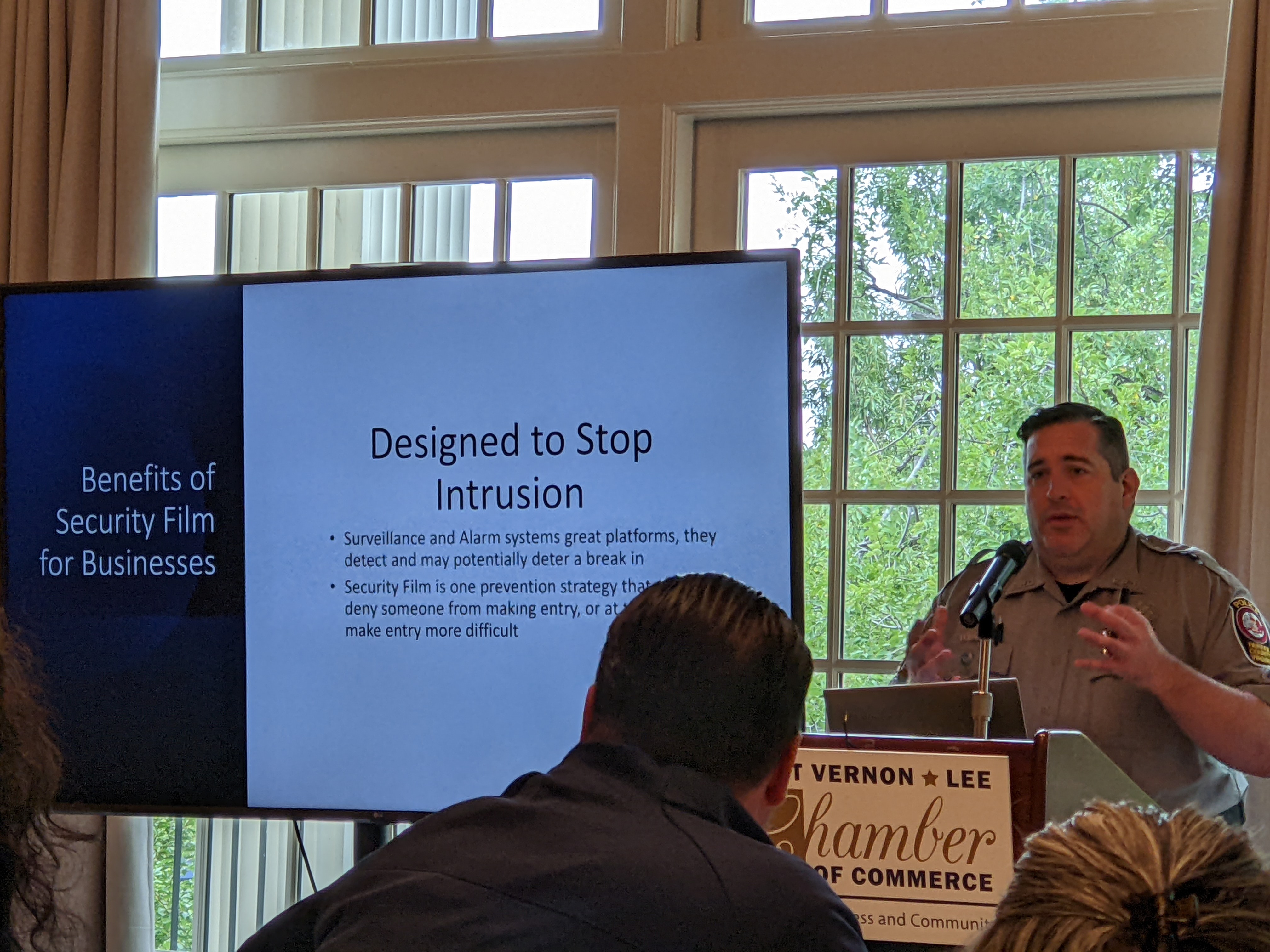