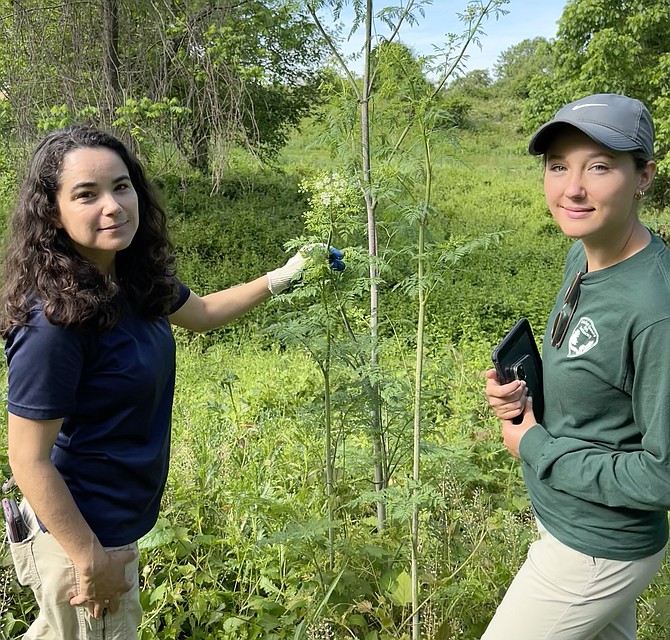 By By Susan Laume

Hearing the name of some plants alone can engender hosts of images. Roses evoke romance, Mistletoe impromptu holiday kisses, and poison hemlock the infamous death of ancient Greek philosopher, Socrates.  Those plants can grow in our area of Virginia; and while we happily gaze on roses in summer and mistletoe in the winter, spotting poisonous hemlock in Spring can be cause for concern. Particularly since that plant looks very much like several other less harmful, edible plants growing locally. So when multiple patches of poison hemlock were recently spotted in Laurel Hill Park in Lorton by a Virginia Master Naturalist, Fairfax County’s Invasive Management Area Program was alerted and quick to respond.

Known as Hemlock, Poison Hemlock, or Wild Hemlock, (Conium maculatum) is a highly poisonous biennial flowering plant in the carrot family. It is not native here but, as a climate hardy invasive, although not common, has a massive range in North America.

All parts of the Poison hemlock plant are toxic to humans and most mammals, especially the seeds and roots, and especially when ingested; the leaves are most toxic during the Spring. Some people also are sensitive to the oils if they touch the plant. The plant grows rapidly with a long penetrating root and has a distinctive unpleasant odor. Its hollow stems, which can grow from three to eight feet, are usually streaked with a dark maroon or red color toward the base.

“Hemlocks are among the few plants that can cause life-threatening toxicity,” according to guidance in Medscape. But no human deaths from hemlock ingestion have been reported to U.S. Poison Control Centers during the past 10 years.

Similar in appearance are the edible wildflowers, Queen Anne’s Lace and Cow parsley, which are feral carrot plants in the Umbellifer family. The edible plants lack the purple mottling of hemlock on their stems, which, in the case of Queen Anne's lace, is also more hairy. Queen Anne’s lace (Daucus carata) was used as a sweetener by American colonists and by the Irish, who boiled the taproot as a treat. The more invasive Cow parsley (Anthriscos sylvestris) tastes like carrot and chervil, and was used by Native Americans for food, medicine and as a mosquito repellent.

According to Christian mythology, hemlock grew on the hill where Jesus was crucified and became toxic when touched by his blood, still bearing the blood streaks on its stem today.

The most infamous poisoning by hemlock was likely that of Socrates, who chose a hemlock drink to enact his sentence of death for being found guilty of impiety and corrupting the minds of young men of Athens in 399 BC.  Shakespeare, who often used poisons in his plots, included “root of hemlock” in the three witches’ cauldron brew, noting that when dug at night it was a “charm of powerful trouble.” He likely, instead, had Atropa Belladonna, a deadly nightshade, in mind for “Romeo and Juliet.”  In modern times, Agatha Christie’s character, Hercule Poirot, solves a hemlock murder in “Five Little Pigs” published in 1942.

How does the poison work?  Poison hemlock contains the chemical compound coniine, a poisonous alkaloid. Although mentioned in Anglo-Saxon medicine as early as the 10th century, overdose produces paralysis causing respiratory functions to cease and death from asphyxia.  Taking 48 to 72 hours for the full toxic effect, the unfortunate being that ingests the substance remains mentally alert and can only be saved by ventilation. Ingesting just six to eight leaves can be fatal for adult humans.  Though any who are fortunate to survive have no long term health effects.

The plants in Laurel Hill Park were recognized by a Virginia Master Naturalist, a volunteer at the park.

President of the Fairfax chapter, Marilyn Parks, explains, “The Virginia Master Naturalist Program is a statewide corps of more than 2,100 volunteers providing natural resource education, citizen science, and stewardship in their communities.” Volunteers contributed over 178,000 service hours in 2021.

“There are real concerns with the toxicity of poison hemlock, as the entire plant is toxic to mammals, including humans,” says IMA’s program manager Patricia Greenberg. “However, it is illegal to take or remove plants from Park Authority property without the permission of the Park Authority. This rule is meant to protect people and the parkland.”

The county will work to remove the plants soon, in part due to its invasive tendencies. Says Greenberg, “Poison hemlock acts as a pioneer species, quickly colonizing sites and displacing native species, especially in previously disturbed soils. Like all invasive species, without management it will continue to spread and become harder to eradicate once it dominates more land.” 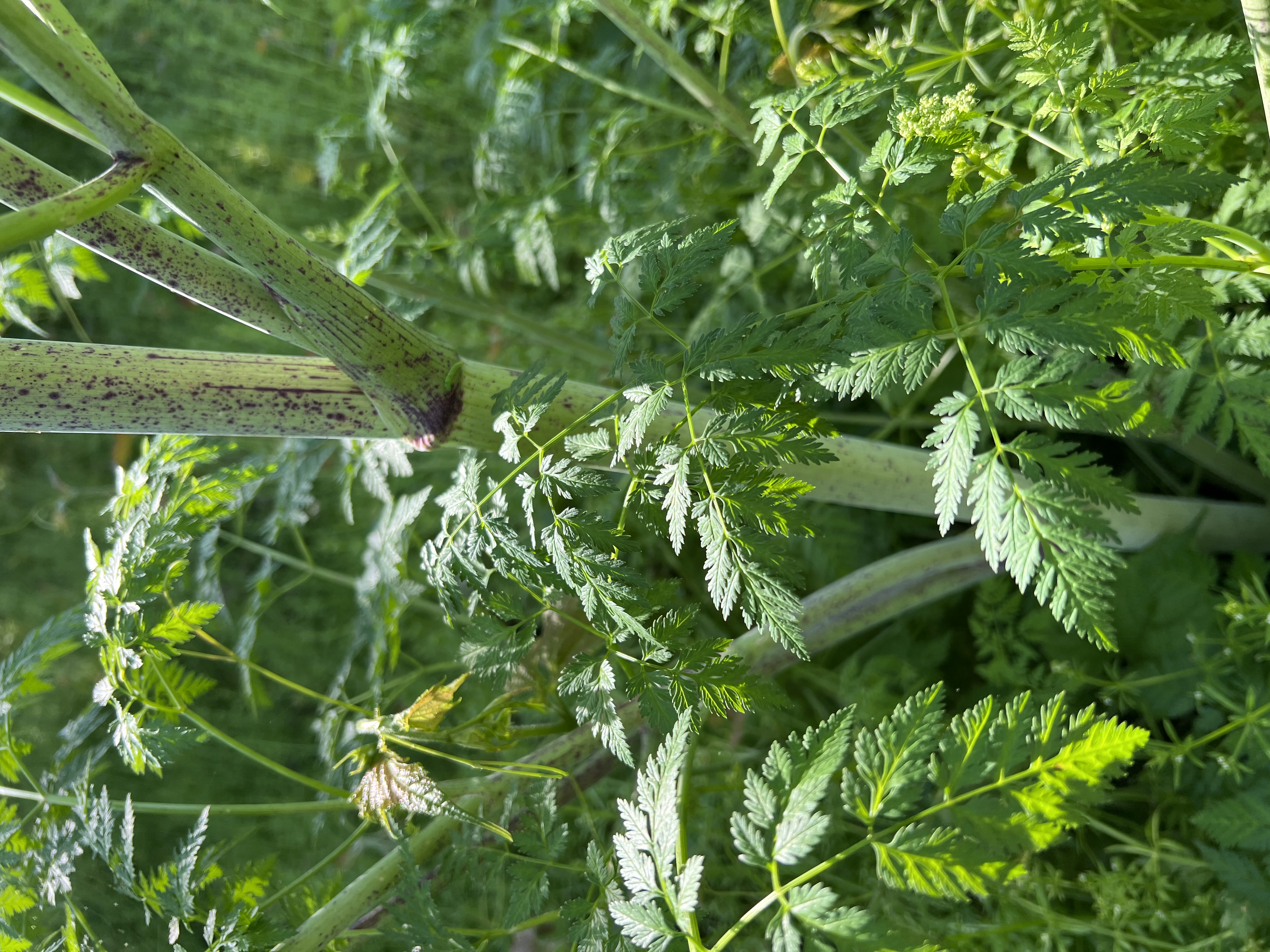 She and her staff have already assessed the growth area, mapping out and calculating the space to develop their treatment plan. Greenberg commented that the plant’s spread has likely been helped by water in one area, seeing the plants grow on a small ridge, then along a water ditch below. Since the number of plants is too large for the staff to dig out manually, encompassing about an acre, a herbicide will be used to kill the plants.

The author is a certified Virginia Master Naturalist and member of the county Invasive Management and park volunteer teams.