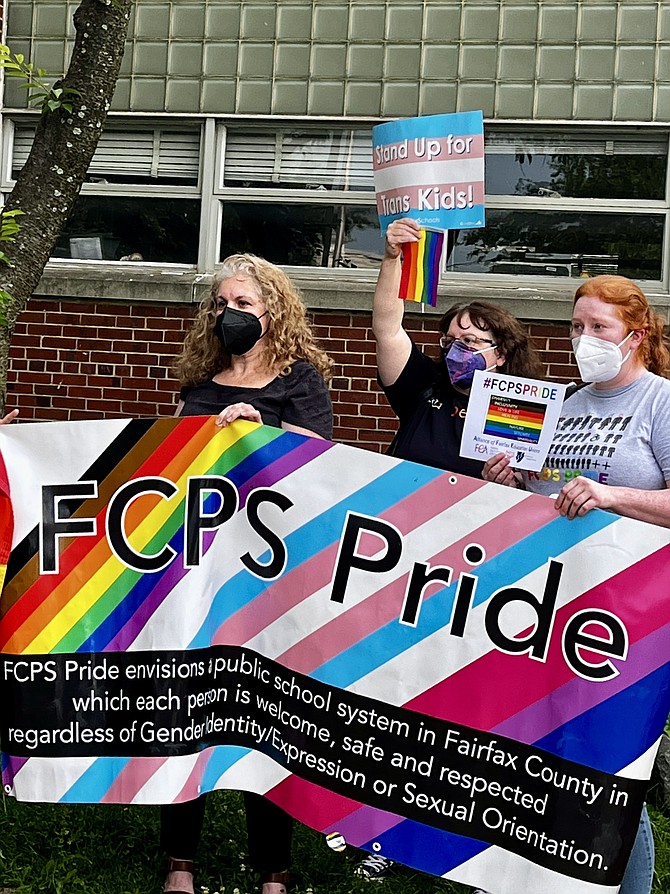 Does every student in a Virginia public school curriculum, Black, Indigenous, students of color, disabled, immigrant, and others, deserve to be accurately represented?

"As of 10:30 a.m., Monday, Aug. 8, 707 students have signed the petition, 627 of them being Virginia students," said Rivka Vizcardo-Lichter, student advocate and president of the Pride Liberation Project.

The students request that  "for the sake of our education and our safety," VDOE develop guidelines around the Virginia 2022 General Assembly law, Senate Bill 656, to clarify that "the LGBTQIA+ community is not inherently sexual." The letter said that making guidelines that don't clarify that LGBTQIA+ topics are not inherently sexual would have a "chilling effect on their education."

Senate Bill 656  is consistent with Gov. Youngkin's 2021 gubernatorial campaign, during which he pledged to give parents a greater say in determining the curriculum for their children. https://lis.virginia.gov/cgi-bin/legp604.exe?221+sum+SB656

“While the bill is lauded by some as parental choice, its true intent and impact is classroom censorship,” says the ACLU of Virginia. “It needlessly singles out ‘sexually explicit content’ while there are already processes at local school districts for parents to access and review curriculum, and request accommodations for their children.”

Some students and others are concerned that the Youngkin state school board could deem just the mention of LGBTQIA+ as sexually explicit material.

"Erasing Queer people from our classes would lead to fictionalized and over-simplified instruction, given the immense contributions that LGBTQIA+ people have made to our state and country. Moreover, every student, including LGBTQIA+ youth, deserves to be accurately represented in our curriculum," stated the letter.

Immediately after sending the letter, Vizcardo-Lichtert said in an interview that the organization "discovered the content (of SB 656) a bit late, and we're very concerned." She added, "Homosexuality is defined as sexual conduct under the Virginia Code. It is a very intentionally vague bill that seems fine on the outside, that we're trying to keep sexually explicit content out of our schools," Vizcardo-Lichter said, "But if you dig a little deeper into the fine print, you'll see that under this sexually explicit content, Queer people are included."

Virginia Senate Bill 656 requires VDOE to develop model policies to let parents know when "any instructional material" has "sexually explicit content." The bill does not specify that student input is required.

By Jan. 1, 2023, all school boards in Virginia are required to have adopted regulations that comply with these model policies "but may be more comprehensive than the model policies developed by the Department." The bill states that it does not require the censoring of books in public elementary and secondary schools.

Pride Liberation Project @PrideLiberation tweeted on Aug. 4: "The student voice is clear: do not erase LGBTQ people from the classroom:"

Consequently, according to a release from the Pride Liberation Project, "all references to LGBTQIA+ people in K-12 schools, including Supreme Court cases, historical events" affecting LGBTQIA+ people could be considered sexually explicit content under SB 656, "effectively erasing LGBTQIA+ representation in our school curriculum."

Vizcardo-Lichtert, Pride Liberation Project said that they received the following response from Jim Chapman, VDOE Regulatory and Legal Coordinator, "We greatly appreciate your comments on the guidance document. Your comments will be reviewed by VDOE staff and considered along with the other comments received through Town Hall."

Students attending public schools in Fairfax and Arlington counties and the City of Alexandria responded to requests for comments. Responses are lightly edited for clarity and length.

Natasha Sanghvi, attends Fairfax County Public Schools. "I'm a Queer student in Fairfax. Discussions about Queer identities in the classroom have been crucial to understanding myself, finding community, and thriving in school. None of these conversations have been sexual because my existence isn't inherently sexual. Legislation deeming that ‘homosexuality’ is sexual will only harm Queer students. If the Virginia Department of Education truly believes in equitable and just learning environments for all students, they will clarify that instruction about LGBTQIA+ people is not inherently sexual.”

Robert Rigby is a retired FCPS Latin teacher (2022) and founder and president of FCPS Pride, a countywide group that supports LGBT+ teachers. "The parents, guardians, and educators of FCPS Pride celebrate the students' voices from the Pride Liberation Project. They are among the most important (issues) raised. It is they, Queer, Black, Indigenous, Students of Color, disabled and immigrant students, who will have their existence erased in the classroom by this deceptive policy. Some people, some of whom are parents, want to exclude historically oppressed groups. Most parents of all sorts of students realize, ‘If your child is devalued in school, how can my children know that they are not going to be excluded too?’"

Clare Brown, attends Arlington Public Schools. "I'm a Queer student in Arlington. The ability to teach about marginalized minorities should be absolute across Virginia. The fact that it can be taken away is horrifying. This would remove the chance for Queer and non-Queer students to learn about their friends, family, and themselves. Without the VDOE's clarification that the existence of Queer people isn't inherently sexual, the Queer youth in Arlington will continue to be at risk of sexualization and dehumanization simply for existing.”