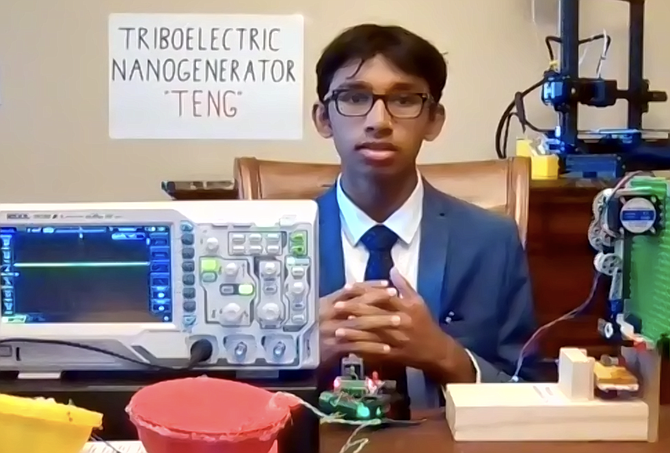 Kriesh described the process that led to his novel solution to an everyday problem, a criterion of the 3M Challenge. His prototype could lead to affordable, reliable, sustainable energy production that would be best used for power storage in places where countries don't have access to reliable power. "I was looking for … something that I could make a change to benefit thousands, maybe even millions, of people," Kriesh said.

Kriesh initially contemplated answering the siren call of global warming and its evidence-based consequences of atmospheric carbon emissions related to coal production. "I realized it is not possible in my position to take out such a large factor of our electricity generation. I needed an alternative way I could help," Kriesh said. He described days of brainstorming.

Kriesh remained mindful of the United Nations Environment Programme Sustainable Development Goal, SDG 7. According to the UN, goal 7 is Ensuring Access to Affordable, Reliable, Sustainable and Modern Energy for All,

“Targets on universal access, energy efficiency, and renewable energy will open a new world of opportunities for billions of people. It will lay the foundation for the eradication of poverty, for climate action, and for a sustainable world. Simply put, without progress on SDG 7, it will be impossible to achieve the 2030 Agenda for Sustainable Development and the Paris Agreement on climate change."

"Due to their simplistic design and everyday materials, they are cheap to produce and easy to manufacture and maintain. The TENG could be a solution to help power coastal areas without clean and safe electricity," stated the 3M Project Submission Description.

To demonstrate the concept during the interview, Kriesh showed that his design used various inexpensive materials, such as wool and aluminum foil, plus Kapton tape, as components of his fabricated hemisphere-within-a-hemisphere. He designed it to save material and get the most surface area for maximum output power generation.

"My dad provided me with a 3D printer. I could design and print multiple models and prototypes for my TENGs. That helped me move the prototyping process much quicker than it could have been without a 3D," Kriesh said.

According to Kriesh, the triboelectric series ranks materials according to their propensity to receive or lose electrons. Triboelectric charging is the electron transfer process resulting from two objects coming into contact and separating.

Consider the static electricity caused by rubbing a balloon against a person's hair and sticking it to a wall; or walking across a carpet in socks and feeling shocked when you touch a metal doorknob.

Holding both components. Kriesh illustrated that there was a main hemisphere and an additional surface. When two of these materials touch, electrons travel from one to the other material, generating a charge. "It can be harvested through these two wires," said Kriesh.

The motion is what makes the power. So that Kriesh's plan can work, he keeps the spheres in moving water. They will get power from the water's movement and store it. Kriesh used his oscilloscope to measure the output voltage.

Kriesh said he refined the model and tested it at the beach for power generation, buoyancy, and sustainability in water. "With calm waves and heavy waves, it was still moving, sloshing." Kriesh estimated that with thousands of these in a line, each would produce approximately 1.7 volts in ideal conditions, enough to power "many households." However, Kriesh said that he believed his design would be best used for power storage.