Springfield Native Trains the Next Generation of U.S. Naval Aviators 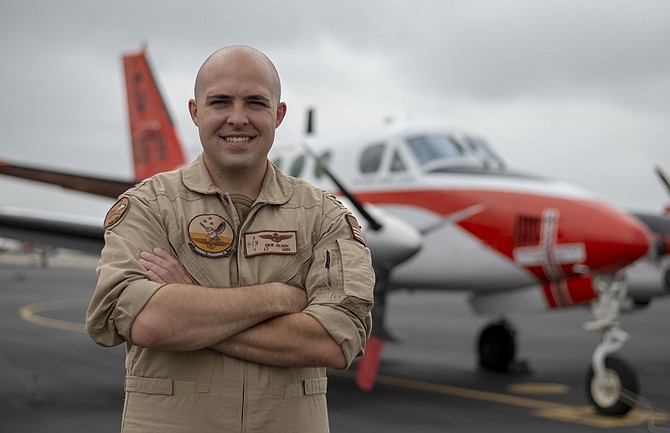 A 2007 Robert E. Lee High School graduate and Springfield native is playing a key role in the lengthy and rigorous training process that transforms officers into U.S. naval aviators.

Lt. Erik Olsen is an instructor pilot with the “Wise Owls” of Training Squadron (VT) 31, based in Naval Air Station Corpus Christi, Texas. The squadron flies the T-44C Pegasus aircraft.

A Navy instructor pilot is responsible for taking command of the aircraft to ensure safety of the flight.

“I enjoy mentoring the student pilots in the air and on the ground,” Olsen said.

OLSEN credits success in the Navy to many of the lessons learned growing up in Springfield.

“My family and my hometown near Washington D.C., instilled a sense of duty to serve and be part of something bigger than myself,” Olsen said.

After graduation, pilots continue their training to learn how to fly a specific aircraft, such as the Navy’s P-8 Poseidon maritime patrol aircraft or the Marine Corps’ MV-22 Osprey tilt-rotor aircraft. They are later assigned to a ship or land-based squadron.

“Our priorities center on people, capabilities and processes, and will be achieved by our focus on speed, value, results and partnerships,” said Secretary of the Navy Richard V. Spencer. “Readiness, lethality and modernization are the requirements driving these priorities.”

Though there are many ways for sailors to earn distinction in their command, community and career, Olsen is most proud of earning his instructor pilot qualification.

“It was recognition of my hard work, both in flight school and in the fleet,” Olsen said. “It has allowed me to train my replacement in Naval aviation.”

SERVING IN THE NAVY is a continuing tradition of military service for Olsen, who has military ties with family members who have previously served. Olsen is honored to carry on the family tradition.

“My grandfather was a Naval aviator and my father was a surface warfare officer,” Olsen said. “These men are my heroes, it is my honor to continue the tradition.”

As a member of one of the U.S. Navy’s most relied-upon assets, Olsen and other sailors know they are part of a legacy that will last beyond their lifetimes providing the Navy the nation needs.

“I feel honored to serve my country and be part of something I believe in,” Olsen said. “I am proud to continue in my family’s footsteps and hope to be a strong role model for my children.”